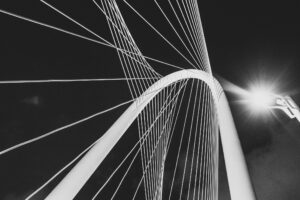 Like most of you, I am a fundamental investor at heart. I started my career in the hedge fund business working for famed value investor Seth Klarman (whose book, Margin of Safety, is treasured by those lucky enough to have a copy). The lessons of intrinsic value stuck. I am also a believer that markets are reasonably efficient: when prices get out of whack, investors figure this out and buy things that are cheap and sell those that are dear. To quote Warren Buffett’s mentor, Benjamin Graham, “over time markets are a weighing machine.”

Managed futures strategies are the antithesis of fundamental investing. The strategies are designed to identify trends: if an asset goes up (or down), it’s likely to keep going. The models don’t care about intrinsic value or mean reversion – they seek out momentum. As Graham also said, over short periods of time, markets are a voting machine. In markets, voting is driven by fear and greed.

So why should a fundamental, value-biased investor allocate to managed futures today? The first answer lies in the theory of diversification. A portfolio with disparate assets is less risky: Nobel Laureate Harry Markowitz called this the “only free lunch in finance.” We, like many others, have published research extolling the diversification benefits of managed futures: low or zero correlation to equities and a tendency to perform better during bear markets. Add managed futures to a portfolio of stocks and bonds, and returns could rise while risk declines.

At its core, true diversification is about finding strategies that behave differently from the rest of the portfolio. If you invest with a dozen fundamental fund managers, they all work from a similar playbook: when prices drop below intrinsic value, buy. The near-term voting machine is wrong, they argue, and with time they’ll be rewarded for stepping in. But this is risky: prices can go far lower than intrinsic value, and fundamental investors often end up catching the proverbial falling knife.

The reason this is important today is that most investors we speak with seem to have a similar view of the world. Growth is slow, but we will avoid a recession. Government bond yields are artificially low, so investors should take on more credit risk to get a respectable yield. Equities are expensive, but companies are well run and profitable; in an age of universal monetary easing, equities are still the best game in town. If things get bad, the Fed will backstop the economy and markets with aggressive rate cuts. Consider this the base case.

But what if this consensus view is wrong? Economic forecasting is notoriously inaccurate: synchronized global growth was a given in early 2018 and look at the world today. The Fed missed the onset of the last several recessions and was late with the punch bowl. We are in the midst of an escalating trade war and potential multi-decade retreat from globalization. The threat of a hard Brexit is real and no one knows how bad the damage will be. Currency wars are back on the table as a policy tool. Populism is rising and political systems are under siege. With most new bond issues near junk, questionable ratings and chronically light covenants, credit markets are in a bubble and vulnerable to widespread downgrades. Consider these the black swan scenarios.

So how might fundamental investors fare if the world deteriorates? Not well. Equities will drop and credit spreads will widen (high yield declined 25% in 2008 even as Treasury yields collapsed). Many traditional diversifiers, like commodities, are likely to plummet as well. Fundamental investors may sell to stem losses or buy dips that don’t materialize. Less liquid markets may freeze up again, trapping cash and liquid reserves. Intrinsic value becomes difficult to calculate and irrelevant to markets gripped by fear.

Over time, of course, market chaos creates a world of opportunity. As Buffett said, the markets will briefly rain gold. While the fundamental investor may see bargains everywhere, though, many may be unable to capitalize on it. Few investors today are sitting on large piles of cash – yields are too low and pressure is high to remain fully invested in a bull market. They’ll be forced to play defense on the way down. Fund managers may face redemptions and will be focused on what they can sell, not buy. Even patient, long term investors will struggle with John Maynard Keynes’s truism: the markets can remain irrational longer than you can remain solvent.

Managed futures are one of the few strategies built to profit from a market voting machine gone awry. If a recession hits and Treasury yields drop to zero, managed futures funds are likely to be long bonds (as they have been since yields started to drop last Fall). If monetary easing causes gold prices to double, they should enjoy the ride. If Brexit leads to a collapse in the British Pound and Euro, they’ll likely be short. Since the 1990s, dramatic re-pricings have often been fertile ground for trend followers: in the early 2000s, managed futures rose 48% during the dotcom crash when the S&P 500 dropped 45%; in 2008 they rose 20% when stocks plummeted 40%; and from 2014 to 2016 managed futures1 rose 18% when oil dropped from $105 to $34.

Of course, no one can accurately predict what the world or the markets will look like in a year or two. In the base case, things will be fine. But given the economic storm clouds, a prudent investor today should be thinking ahead. In 2008, for example, an investor who had moved $100 from equities to managed futures “made” $60 for every dollar invested — $20 in profits and $40 “saved” by avoiding losses in the S&P 500. Those profits could provide essential liquidity to capitalize on once-in-a-generation opportunities. Fundamental investors with a large allocation to managed futures may be better positioned, as Buffet would say, to catch bars of gold, not with a thimble, but a bucket.