The Trouble with Alpha: Part I

Investors equate “alpha” to outperformance.  A high alpha fund presumably delivers substantial excess returns relative to its benchmark. True alpha is short-hand for manager skill.  Statistically, alpha simply is the result of a linear regression between two return streams. The regression finds the straight line (ordinary least squares) that best fits the time series. Visually, beta is the slope of the line and alpha is where it crosses the vertical axis. The calculation was designed to uncover managers who outperform simply by taking on more risk. A manager who leverages to outperform the S&P in an up year will show a high beta but no alpha.  Conversely, a manager who took less risk yet matched the S&P will have a beta of less than one and may show meaningful alpha. This analysis makes sense when you have two very similar investments. For instance, if a US-focused large capitalization mutual fund consistently earns 1% per annum more than the S&P with similar risk (beta), we’d expect to see alpha of around 1% per annum.

As with all quantitative analysis, however, the devil is in the details. Importantly, alpha is always relative to something else:  change the benchmark and it means something very different. Use a different time period (window), and the results vary. Past alpha often does not translate into future alpha.

As we know, idiosyncratic returns can improve the risk-adjusted returns of a diversified portfolio, and hence investors will pay high fees for “alpha.” Unfortunately, as a general rule, alpha is widely misunderstood and misused. In this series of articles, we’ll take a closer look at “alpha” and try to clear up some of the confusion.

Imagine that we’re looking for a long-biased fund.  In a screen of potential managers, we find a fund (Fund A) that has roughly matched the performance of the S&P 500 over a five-year period – no mean feat given that the vast majority of mutual funds underperformed. Yet Fund A did this with less risk, as 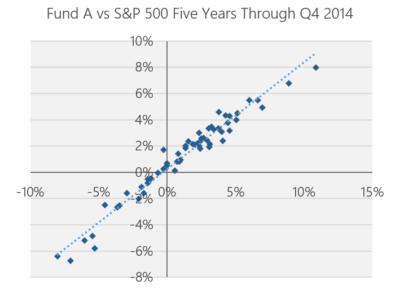 measured by a beta of 0.8 and a lower standard deviation, and delivered impressive alpha of 2.71% per annum. Summary statistics are below and the calculation of alpha and beta is shown in the scatterplot to the right (note:  the scatterplot shows monthly data net of LIBOR, so alpha will be roughly twelve times where the line crosses the y axis):

Most investors would leap at the opportunity to invest. There’s a catch, however. Fund A is simply the S&P 500 with moderate smoothing. While less of an issue, perhaps, with mutual funds, the level of smoothing is comparable to that of many hedge fund portfolios. Statistically, smoothing depresses beta and causes a commensurate increase in alpha.  In this case, lower risk and “excess returns” are entirely attributable to a statistical quirk. The takeaway is that the alpha generated by funds with artificially low volatility (due to holding illiquid/infrequently traded securities for example) could prove illusory, as the financial crisis made clear.